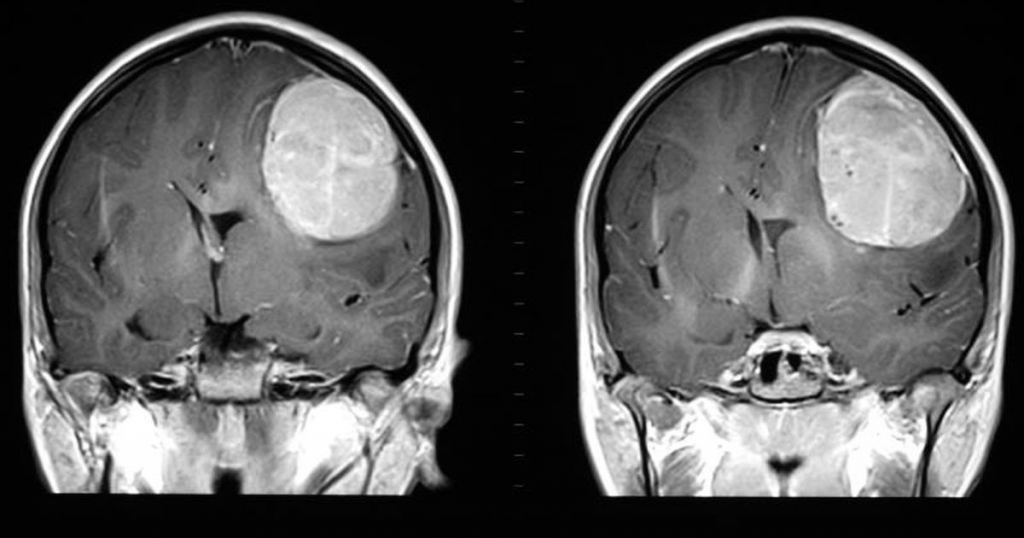 Dr. William Courtney was interviewed by the Huffington Post and talked about an 8 month old baby suffering from a malignant brain tumor (see MRI images at left).(2)

The parents declined conventional treatment with chemotherapy, and used cannabis oil (medical marijuana) instead.  Miraculously, after two months of cannabis oil, the MRI scan showed dramatic improvement. “They were putting cannabinoid oil on the baby’s pacifier twice a day, increasing the dose… And within two months there was a dramatic reduction.”(2)

The initial MRI scan at the upper left frame showed typical features of an inoperable brain tumor, with features of a “butterfly glioma”  with invasion of the  corpus callosum and spread across the midline,    At 2 months, the follow up MRI scan shows regression of tumor, and at 4 and 8 months the scans show complete clearing, and are totally clean.

This is Highly Significant

Dr Courtney says: “The child is a miracle baby…. we should be insisting this is frontline therapy for all children before using medications that have horrific long term side effects. (such as chemo).”(2)

How does it work ?  Cannabis oil causes stress to the endoplasmic reticulum in the cancer cells.  This causes the cancer dells to undergo self programmed cell death, called apoptosis.  This selectively kills the cancer cells, while leaving the normal tissue unharmed.(4-11)

“Endoplasmic Reticulum (ER) stress–evoked upregulation of the p8/TRB3 pathway induced autophagy via inhibition of the Akt/mTORC1 axis and that activation of autophagy promoted the apoptotic death of tumor cells. The uncovering of this pathway, which we believe is novel, for promoting tumor cell death may have therapeutic implications in the treatment of cancer”(4) quote from Dr. María Salazar.

Clinical Trials are underway funded by GW Pharmaceuticals for the treatment of Recurrent Glioblastoma Multiforme (GBM) in 20 patients:

“pre-clinical research conducted by GW has demonstrated  cannabinoids inhibit the viability of glioma cells both in vitro and in vivoi,ii via apoptosis or programmed cell death.  GW has identified the putative mechanism of action for our cannabinoid product candidate, where autophagy and programmed cell death are stimulated via stimulation of the TRB3 pathway. ”  PRNews

This article is part three of a series.  For Part One, For part Two

5) http://www.ncbi.nlm.nih.gov/pubmed/16804518
Br J Cancer. 2006 Jul 17;95(2):197-203. Epub 2006 Jun 27.
A pilot clinical study of Delta9-tetrahydrocannabinol in patients with recurrent glioblastoma multiforme.  Guzmán M1, Duarte MJ, Blázquez C, Ravina J, Rosa MC, Galve-Roperh I, Sánchez C, Velasco G, González-Feria L.
Delta(9)-Tetrahydrocannabinol (THC) and other cannabinoids inhibit tumour growth and angiogenesis in animal models, so their potential application as antitumoral drugs has been suggested. However, the antitumoral effect of cannabinoids has never been tested in humans. Here we report the first clinical study aimed at assessing cannabinoid antitumoral action, specifically a pilot phase I trial in which nine patients with recurrent glioblastoma multiforme were administered THC intratumoraly. The patients had previously failed standard therapy (surgery and radiotherapy) and had clear evidence of tumour progression. The primary end point of the study was to determine the safety of intracranial THC administration. We also evaluated THC action on the length of survival and various tumour-cell parameters. A dose escalation regimen for THC administration was assessed. Cannabinoid delivery was safe and could be achieved without overt psychoactive effects. Median survival of the cohort from the beginning of cannabinoid administration was 24 weeks (95% confidence interval: 15-33). Delta(9)-Tetrahydrocannabinol inhibited tumour-cell proliferation in vitro and decreased tumour-cell Ki67 immunostaining when administered to two patients. The fair safety profile of THC, together with its possible antiproliferative action on tumour cells reported here and in other studies, may set the basis for future trials aimed at evaluating the potential antitumoral activity of cannabinoids.

Cannabinoids, the active components of Cannabis sativa L., act in the body by mimicking endogenous substances–the endocannabinoids–that activate specific cell surface receptors. Cannabinoids exert various palliative effects in cancer patients. In addition, cannabinoids inhibit the growth of different types of tumor cells, including glioma cells, in laboratory animals. They do so by modulating key cell signaling pathways, mostly the endoplasmic reticulum stress response, thereby inducing antitumoral actions such as the apoptotic death of tumor cells and the inhibition of tumor angiogenesis. Of interest, cannabinoids seem to be selective antitumoral compounds, as they kill glioma cells, but not their non-transformed astroglial counterparts. On the basis of these preclinical findings, a pilot clinical study of Delta(9)-tetrahydrocannabinol (THC) in patients with recurrent glioblastoma multiforme has been recently run. The good safety profile of THC, together with its possible growth-inhibiting action on tumor cells, justifies the setting up of future trials aimed at evaluating the potential antitumoral activity of cannabinoids.

7) http://www.ncbi.nlm.nih.gov/pubmed/18088200
Expert Rev Neurother. 2008 Jan;8(1):37-49.
Cannabinoids as potential new therapy for the treatment of gliomas.
Parolaro D1, Massi P..  Gliomas constitute the most frequent and malignant primary brain tumors. Current standard therapeutic strategies (surgery, radiotherapy and chemotherapeutics, e.g., temozolomide, carmustin or carboplatin) for their treatment are only palliative and survival diagnosis is normally 6-12 months. The development of new therapeutic strategies for the management of gliomas is therefore essential. Interestingly, cannabinoids have been shown to exert antiproliferative effects on a wide spectrum of cells in culture. Of interest, cannabinoids have displayed a great potency in reducing glioma tumor growth either in vitro or in animal experimental models, curbing the growth of xenografts generated by subcutaneous or intratecal injection of glioma cells in immune-deficient mice. Moreover, cannabinoids appear to be selective antitumoral agents as they kill glioma cells without affecting the viability of nontransformed counterparts. A pilot clinical trial on patients with glioblastoma multiforme demonstrated their good safety profile together and remarkable antitumor effects, and may set the basis for further studies aimed at better evaluating the potential anticancer activity of cannabinoids.

8) http://www.ncbi.nlm.nih.gov/pmc/articles/PMC3835116/  full text free
Cancers (Basel). 2010 May 26;2(2):1013-26. doi: 10.3390/cancers2021013.
Molecular mechanisms involved in the antitumor activity of cannabinoids on gliomas: role for oxidative stress.
Massi P1, Valenti M, Solinas M, Parolaro D.
Cannabinoids, the active components of Cannabis sativa, have been shown to exert antiproliferative and proapoptotic effects on a wide spectrum of tumor cells and tissues. Of interest, cannabinoids have displayed great potency in reducing the growth of glioma tumors, one of the most aggressive CNS tumors, either in vitro or in animal experimental models curbing the growth of xenografts generated by subcutaneous or intrathecal injection of glioma cells in immune-deficient mice. Cannabinoids appear to be selective antitumoral agents as they kill glioma cells without affecting the viability of non-transformed cells. This review will summarize the anti-cancer properties that cannabinoids exert on gliomas and discuss their potential action mechanisms that appear complex, involving modulation of multiple key cell signaling pathways and induction of oxidative stress in glioma cells.

Free PMC Article
Conclusions  The therapy of gliomas, the most frequent class of malignant primary brain tumors and one of the most aggressive forms of cancer characterized by high invasiveness, a high proliferation rate and rich neovascularization, could benefit from the use of cannabinoids, the active compounds of Cannabis sativa, and their synthetic derivatives. They have been shown to mimic the endogenous substances named “endocannabinoids” that activate specific cannabinoid receptors (CB1 and CB2).
Cannabinoids have been proven to inhibit glioma tumor growth in either in vitro or in vivo models through several cellular pathways such as elevating ceramide levels, modulating PI3K/Akt, MAPK kinases, inducing autophagy and oxidative stress state in glioma cells, thus arresting cell proliferation and inducing apoptosis. Since cannabinoids kill tumor cells without toxicity on their non transformed counterparts, probably modulating the cell survival/cell death pathways differently, they can represent a class of new potential anticancer drugs.

9) http://www.ncbi.nlm.nih.gov/pubmed/24204703  free full text
PLoS One. 2013 Oct 21;8(10):e76918. doi: 10.1371/journal.pone.0076918. eCollection 2013.
Cannabidiol, a non-psychoactive cannabinoid compound, inhibits proliferation and invasion in U87-MG and T98G glioma cells through a multitarget effect.
Solinas M1, Massi P, Cinquina V, Valenti M, Bolognini D, Gariboldi M, Monti E, Rubino T, Parolaro D.
In the present study, we found that CBD inhibited U87-MG and T98G cell proliferation and invasiveness in vitro and caused a decrease in the expression of a set of proteins specifically involved in growth, invasion and angiogenesis. In addition, CBD treatment caused a dose-related down-regulation of ERK and Akt prosurvival signaling pathways in U87-MG and T98G cells and decreased hypoxia inducible factor HIF-1α expression in U87-MG cells. Taken together, these results provide new insights into the antitumor action of CBD, showing that this cannabinoid affects multiple tumoral features and molecular pathways. As CBD is a non-psychoactive phytocannabinoid that appears to be devoid of side effects, our results support its exploitation as an effective anti-cancer drug in the management of gliomas.

10) http://www.ncbi.nlm.nih.gov/pmc/articles/PMC3551920/
http://www.ncbi.nlm.nih.gov/pubmed/23349970
PLoS One. 2013;8(1):e54795. doi: 10.1371/journal.pone.0054795. Epub 2013 Jan 22.  Local delivery of cannabinoid-loaded microparticles inhibits tumor growth in a murine xenograft model of glioblastoma multiforme.
Hernán Pérez de la Ossa D1, Lorente M, Gil-Alegre ME, Torres S, García-Taboada E, Aberturas Mdel R, Molpeceres J, Velasco G, Torres-Suárez AI.
Cannabinoids, the active components of marijuana and their derivatives, are currently investigated due to their potential therapeutic application for the management of many different diseases, including cancer. Specifically, Δ(9)-Tetrahydrocannabinol (THC) and Cannabidiol (CBD) – the two major ingredients of marijuana – have been shown to inhibit tumor growth in a number of animal models of cancer, including glioma. Although there are several pharmaceutical preparations that permit the oral administration of THC or its analogue nabilone or the oromucosal delivery of a THC- and CBD-enriched cannabis extract, the systemic administration of cannabinoids has several limitations in part derived from the high lipophilicity exhibited by these compounds. In this work we analyzed CBD- and THC-loaded poly-ε-caprolactone microparticles as an alternative delivery system for long-term cannabinoid administration in a murine xenograft model of glioma. In vitro characterization of THC- and CBD-loaded microparticles showed that this method of microencapsulation facilitates a sustained release of the two cannabinoids for several days. Local administration of THC-, CBD- or a mixture (1:1 w:w) of THC- and CBD-loaded microparticles every 5 days to mice bearing glioma xenografts reduced tumour growth with the same efficacy than a daily local administration of the equivalent amount of those cannabinoids in solution. Moreover, treatment with cannabinoid-loaded microparticles enhanced apoptosis and decreased cell proliferation and angiogenesis in these tumours. Our findings support that THC- and CBD-loaded microparticles could be used as an alternative method of cannabinoid delivery in anticancer therapies.

11) http://www.ncbi.nlm.nih.gov/pmc/articles/PMC3579246/
http://www.ncbi.nlm.nih.gov/pubmed/22506672  free full text
Br J Clin Pharmacol. 2013 Feb;75(2):303-12.
Cannabidiol as potential anticancer drug.
Massi P1, Solinas M, Cinquina V, Parolaro D.
Over the past years, several lines of evidence support an antitumourigenic effect of cannabinoids including Δ(9)-tetrahydrocannabinol (Δ(9)-THC), synthetic agonists, endocannabinoids and endocannabinoid transport or degradation inhibitors. Indeed, cannabinoids possess anti-proliferative and pro-apoptotic effects and they are known to interfere with tumour neovascularization, cancer cell migration, adhesion, invasion and metastasization. However, the clinical use of Δ(9)-THC and additional cannabinoid agonists is often limited by their unwanted psychoactive side effects, and for this reason interest in non-psychoactive cannabinoid compounds with structural affinity for Δ(9)-THC, such as cannabidiol (CBD), has substantially increased in recent years. The present review will focus on the efficacy of CBD in the modulation of different steps of tumourigenesis in several types of cancer and highlights the importance of exploring CBD/CBD analogues as alternative therapeutic agents.