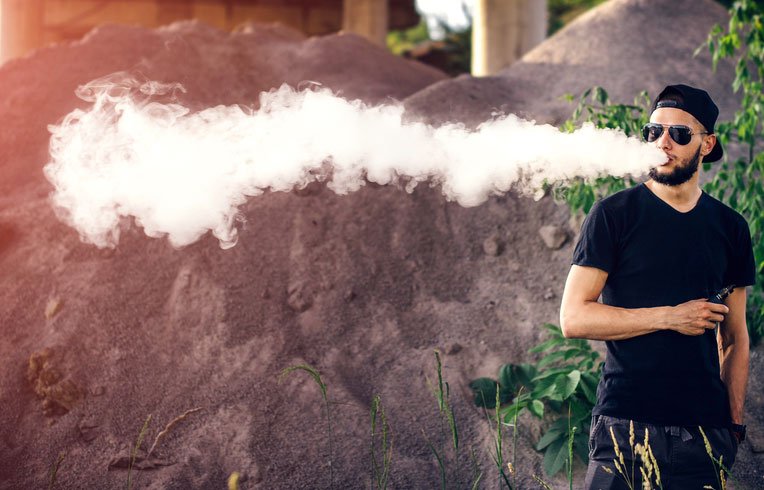 Vaping, pre-filled cartridges and disposable pens, are making consuming cannabis  easier, and supposedly healthierIn fact, Recent data by BDS Analytics and ArcView Market Research found that  cannabis concentrate sales could pass the actual flower in five years. With pens, you don’t have to be  grinding up weed, rolling a joint, and smoking which can draw unwanted attention, vape pens produce with hardly any smell.

But are they really less harmful? E cigarettes, whether used for cannabis or Tobacco have been heavily marketed as a healthy alternative, but lots of science shows otherwise.  For example, a study out of Hong Kong, China suggested that the chemicals found in most e-cigarettes are more harmful to human health than polluted air. In fact, researchers claimed that many e-cigarettes contain an alarming 1 million times more cancer-causing substances than outdoor air. These findings provoked grave concern surrounding the safety of vaping in Hong Kong, so much so that the government  considered banning the import and sale of e-cigarettes. Check out our article here to learn more.

Polybrominated diphenyl ethers(PBDEs), a flame retardant used extensively in furniture and electronic products, were detected in a range of 1.7 to 1,490ng/ml in the 13 brands of e-cigarettes.

So, the concern here is with regards to the materials used to make these electronic cigarettes and whether or not we are actually inhaling any of them along with the vape.

That being said, A recent 2014 study of approximately 100 subjects who both smoked and vaporized, consumers reported several advantages of vaporizing over smoking, including the lack of smoke smell and better taste. They also reported that the same amount of cannabis product produced more effect with vaping. After the study, nearly all participants planned to continue vaporizer use.

There is no doubt about it, vaping a product is far different from burning it. Burning the plant changes its chemical composition and can result it more contamination of the smoke while it goes into your lungs.

The only concern is with the actual vaping product you use, it seems. One thing seems to be for certain though, that vaping marijuana definitely products a more potent effect.

At the end of the day, whether you choose to smoke or vape, it’s important to know what’s in your cannabis and what’s being used to grow it.

When it comes to the testing of marijuana, it’s like the cosmetics industry. There isn’t much oversight.  Even though marijuana testing labs have cropped up to keep tabs on retail marijuana, with each state trying out different regulatory processes, many of these testing labs have been found to lack oversight themselves. You can read more about that here.

GMOs are also a concern, Hyasynth Biologicals laboratory in Montreal currently has scientists working on genetically engineering the active ingredients in marijuana and then patenting them. They are part of multiple genetic engineering firms across Canada and the U.S., that’ve popped up over the past couple of years. You can read more about that here.

If you’d like to grow your own and would like assistance from us, we can provide you with a doctor willing to provide you the prescription you need in order to get your license from the ACMPR program. You can access more about that and find instructions HERE.