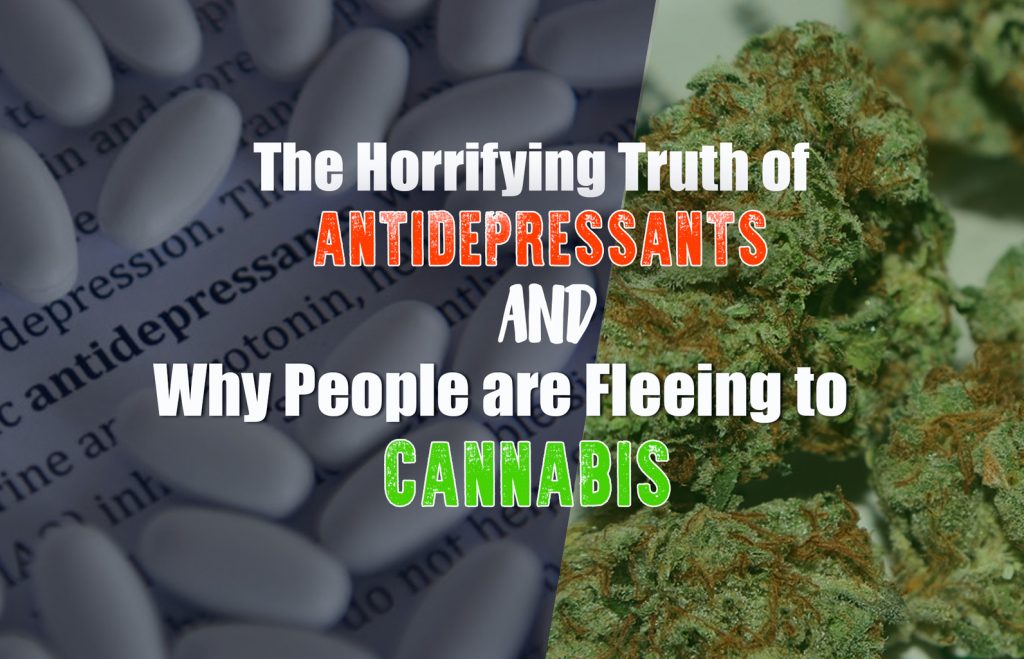 The title of this article might give you the impression that our aim is to frighten you. We assure you it is not. The realities of the pharmaceutical industry are admittedly difficult to swallow, but this is important information given the fact that so many people are taking anti-depressant drugs. While these details may be disturbing, especially if you or someone you know takes anti-depressant drugs, it is important to move past the fear of information and really look at what has happened with the modern day medical industry and the pharmaceutical stranglehold that plagues it today.

This is why so many people are turning towards Cannabis, but not government/pharma grown cannabis, their own. If you live in Canada, this is what we do. We connect people with compassionate doctors via Skype in order to obtain a prescription so the patient can then grow their own amount, which is usually higher than the legal limit depending on your prescription. Visit us HERE to start the process, it’s fast and easy.

“The medical profession is being bought by the pharmaceutical industry, not only in terms of the practice of medicine, but also in terms of teaching and research. The academic institutions of this country are allowing themselves to be the paid agents of the pharmaceutical industry. I think it’s disgraceful.”  – (source)(source) Arnold Seymour Relman (1923-2014), Harvard Professor of Medicine and Former Editor-in-Chief of theNew England Medical Journal

The most recent example of this kind of corruption comes from a study that was published last week in the British Medical Journal  by researchers at the Nordic Cochrane Center in Copenhagen. The study showed that pharmaceutical companies were not disclosing all information regarding the results of their drug trials. Researchers looked at documents from 70 different double-blind, placebo-controlled trials of selective serotonin reuptake inhibitors (SSRI) and serotonin and norepinephrine reuptake inhibitors (SNRI) and found that the full extent of serious harm in clinical study reports went unreported. These are the reports sent to major health authorities like the U.S. Food and Drug Administration.

Tamang Sharma, a PhD student at Cochrane and lead author of the study, said:

We found that a lot of the appendices were often only available upon request to the authorities, and the authorities had never requested them. I’m actually kind of scared about how bad the actual situation would be if we had the complete data. (source)

This study] confirms that the full degree of harm of antidepressants is not reported. They are not reported in the published literature, we know that – and it appears that they are not properly reported in clinical study reports that go to the regulators and from the basis of decisions about licensing. (source)

Peter Gotzsche, a clinician researcher at Cochrane and the co-author of the study, actually tried to gain access to clinical trial reports almost a decade ago for anti-obesity pills. Unfortunately, the European Medicines Agency (EMA) denied them the reports:

They talked about commercial confidentiality although there was absolutely nothing in these reports that was commercially confidential. We explained that all this secrecy actually cost human lives, but they weren’t interested in that at all. (source)

It took years of requests and complaints for this to happen and, while Gotzsche is pleased they were able to achieve this breakthrough, he reminds us that similar progress has yet to made in the United States. He went on to state that researchers need better access to data from clinical trials to conduct assessments unimpeded by industry influence:

It’s deeply unethical when patients volunteer to benefit science and then we let drug companies decide that we cannot get access to the raw data. The testing of drugs should be a public enterprise. (source)

Moncrieff (quoted above) then goes on to express further concerns:

We really don’t have good enough evidence that antidepressants are effective and we have increasing evidence that they can be harmful. So we need to go into reverse and stop this increasing trend of prescribing [them]. (source)

This Is Not The First Time

This is not the first time that pharmaceutical companies have been caught manipulating science in order to get antidepressants onto the shelves. It was only a couple of months ago that an independent review found that the commonly prescribed antidepressant drug Paxil (paroxetine) is not safe for teenagers, even though a large amount of literature had already suggested this previously. The 2001 drug trial that took place, funded by GlaxoSmithKline, found that these drugs were completely safe, and used that ‘science’ to market Paxil as safe for teenagers.

John Ioannidis, an epidemiologist at Stanford University School of Medicine and co-author of the study, is also the author of the most widely accessed article in the history of the Public Library of Science (PLoS), titled Why Most Published Research Findings Are False. In the report, he states that “most current published research findings are false.” And this was more than 10 years ago — the situation has undeniably worsened in the interim.

This echoes the words of Dr. Richard Horton, the current Editor-In-Chief of one of the most reputable reviewed medical journals in the world:

The case against science is straightforward: much of the scientific literature, perhaps half, may simply be untrue. Afflicted by studies with small sample sizes, tiny effects, invalid exploratory analyses, and flagrant conflicts of interest, together with an obsession for pursuing fashionable trends of dubious importance, science has taken a turn towards darkness. (source)

The Editor in Chief of the New England Medical journal, which is also considered to be one of the best in the world, has made similar assertions:

It is simply no longer possible to believe much of the clinical research that is published, or to rely on the judgement of trusted physicians or authoritative medical guidelines. I take no pleasure in this conclusion, which I reached slowly and reluctantly over my two decades as an editor of the New England Journal of Medicine. (source)

A couple of years ago, Lucia Tomljenovic, a PhD in biochemistry and a senior postdoctoral fellow in UBC’s Faculty of Medicine, uncovered documents that reveal vaccine manufacturers, pharmaceutical companies, and health authorities have known about multiple dangers associated with vaccines but chose to withhold them from the public. The documents were obtained from the UK Department of Health (DH) and the Joint Committee on Vaccination and Immunization (JCVI), who advise the Secretaries of State for Health in the UK about diseases preventable through immunizations. The JCVI made “continuous efforts to withhold critical data on severe adverse reactions and contraindications to vaccinations to both parents and health practitioners in order to reach overall vaccination rates.” She goes on to explain that,

The transcripts of the JCBI meetings also show that some of the Committee members had extensive ties to pharmaceutical companies and that the JCVI frequently co-operated with vaccine manufactures on the strategies aimed at boosting vaccine uptake. Some of the meetings at which such controversial items were discussed were not intended to be publicly available, as the transcripts were only released later, through the Freedom of Information Act (FOI). These particular meetings are denoted in the transcripts as “commercial in confidence,” and reveal a clear and disturbing lack of transparency, as some of the information was removed from the text (i.e., the names of the participants) prior to transcript release under the FOI section at the JCVI website. (source)

Below is a clip taken from the One More Girl documentary, a film which looks at the Gardasil vaccine, a medicine designed to prevent Human Papillomavirus. In it, Dr. Peter Rost, MD, a former vice president of one of the largest pharmaceutical companies in the world (Pfizer), shares the truth about the ties between the medical and pharmaceutical industry.

Rost is a former vice president of Pfizer, and a whistleblower of the entire pharmaceutical industry in general. He is the author of The Whistleblower, Confessions of a Healthcare Hitman. Considering his work experience, it would be an understatement to say that he is an insider expert on big pharma marketing.