Can we really trust government grown cannabis? These days, it’s no secret that it’s hard to trust the government, when they grow it, you don’t know what’s in it, and it could more than likely be contaminated. The recent Cannabis Act allowed Canadians to purchase cannabis or grow their own plants or both recreational and medical use, and homegrown cannabis is quickly becoming popular around the country. Growing your own cannabis plants is a rewarding process, and it’s typically much more affordable than buying cannabis from a dispensary.

If you want to learn what steps you need to take. You can refer to the article below:

When it comes to the testing of marijuana, it’s like the cosmetics industry. There isn’t much oversight.  Even though marijuana testing labs have cropped up to keep tabs on retail marijuana, with each state trying out different regulatory processes, many of these testing labs have been found to lack oversight themselves.

Every legal-marijuana state has is own testing regulations and procedures. It’s the same thing in Canada, but we don’t know much about it.  In the united states, different  states utilize  accredited and licensed laboratory. Once marijuana or a marijuana-derived product passes laboratory testing, documentation is provided, which must be passed along to the retail outlets where the marijuana or marijuana products are being sold.

Sure, there are regulates that require cannabis to be tested, but how reliable are they? Some states, like Arizona, doesn’t require medical marijuana to be tested at all.

Health Canada requires that licensed producers test each batch or lot of cannabis for potency, and report the total Tetrahydrocannabinol (THC) and Cannabidiol (CBD) on the packaging and to their patients.  They also require testing for certain pesticides and heavy metals, but that being said, glyphosate is an acceptable pesticide in Canada. Just because it is ‘approved’ does not mean it’s safe.

One scientist analyzed a number of marijuana testing labs in Washington and discovered that four labs had gone months without rejecting any of the marijuana they had tested. These perfect results are virtually impossible to achieve without turning a blind eye or tampering with the data. In other words, the labs were simply letting the marijuana slide through the regulatory process, regardless of its contents or contaminants.

“There’s a simple reason for this: since privately owned marijuana testing labs rely on a client base of cultivators, the labs are incentivized to be lenient with their testing so as not to chase off their client base. Otherwise, cultivators could choose to send their product to other, more “friendly” labs.”(source)

At the end of the day, who are you going to put your trust in, the corporation or yourself?

the Ontario Cannabis Store, which is the only  legal, licensed and regulated retailer in the province, keeps making some big mistakes.

Since sales began in October, they’ve failed big time with a number of  privacy breaches, misdirected orders and have even incorrectly labeled products, not to mention recalled products for mold and, perhaps even more disturbing,  sold Cannabis with bugs in them. Yes, you read that correctly, BUGS.  Many orders from the Ontario Cannabis store have been contaminated insects.

Again, all the more reason to grow your own.

The cannabis in the picture above , the Washington Post reports, is the federally approved cannabis distributed to Sue Sisley, a researcher conducting a first-ever clinical trial of cannabis as a potential treatment for post-traumatic stress disorder (PTSD). To underscore the difference between government marijuana and the medical cannabis familiar to patients in most legal states, the Post published this side-by-side comparison: 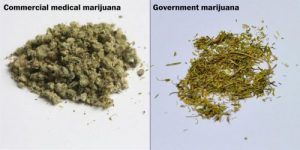 “Inhaling that would be like eating an apple, including the seeds inside it and the branch it grew on,” professional cannabis critic Jake Browne told the Post. “People typically smoke the flower of the plant, but here you can clearly see stems and leaves in there as well.”

Or as Twitter user @lightningjeff put it, “That’s drug abuse right there on the right.”

How can clinical trials begin with such weed? That’s not really fair, is it? When cannabis is in control of the government, and grown by the government, it’s medicinal properties and benefits will not be the same as it would be if you were to grow your own.

Across Canada and the U.S., that’ve popped up over the past couple of years.

As CBC news reports, “Cannabis producers, biotech firms and drug companies, along with the law firms who represent them, say genetic engineering — a controversial technique pioneered in agriculture — will allow companies to patent genes synthesized from cannabis, potentially unlocking billions of dollars in new investment and creating jobs.”

Again, there are many concerns if you don’t grow your own.