Federally grown medical cannabis, for use in a first-ever clinical trial around PTSD, not only resembled grass clippings—it also lacked potency and contained more mold and yeast than legal states like Washington or Colorado allow. (Sue Sisley/Multidisciplinary Association for Psychedelic Studies).

This isn’t that surprising, and it’s something that most cannabis users, and medicinal cannabis suspected.

If you haven’t already heard, Cannabis has been legalized in Canada, but only the ‘big players’ are able to sell it. It still remains illegal for ordinary citizens to grow it, and sell it. That’s where we come in, we can help you obtain your license to grow, so you can grow completely legally, without selling of course. We connect you with compassionate doctors and together, you can determine how much Cannabis is necessary for your issue, and how much you’ll be legally allowed to grow.  Visit us HERE for more details on how to obtain your license to grow from Health Canada.

That bowl of grass above is actually government-approved medical marijuana. Since the 1960s, the United States has required that  all cannabis used for research be sourced through the government.

The cannabis in the picture above , the Washington Post reports, is the federally approved cannabis distributed to Sue Sisley, a researcher conducting a first-ever clinical trial of cannabis as a potential treatment for post-traumatic stress disorder (PTSD). To underscore the difference between government marijuana and the medical cannabis familiar to patients in most legal states, the Post published this side-by-side comparison: 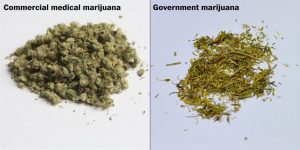 “Inhaling that would be like eating an apple, including the seeds inside it and the branch it grew on,” professional cannabis critic Jake Browne told the Post. “People typically smoke the flower of the plant, but here you can clearly see stems and leaves in there as well.”

Or as Twitter user @lightningjeff put it, “That’s drug abuse right there on the right.”

How can clinical trials begin with such weed? That’s not really fair, is it? When cannabis is in control of the government, and grown by the government, it’s medicinal properties and benefits will not be the same as it would be if you were to grow your own.

It’s vital to know how your cannabis is grown, and what’s in it. If these corporations take over, which they are indeed doing, cannabis might actually turn out to be harmful.

The PTSD researcher, Sisley, said she was disappointed when she first unwrapped the package. “It didn’t look like cannabis. It didn’t smell like cannabis,” she told PBS NewsHour, which described the substance’s as looking “like green talcum powder.”

Some of the samples Sisley received failed to conform to the chemical potency she’d requested for the study, she said. One strain, for example, was supposed to contain 13% THC. Sisley’s testing showed it was closer to 8%.

Other samples were contaminated with mold and yeast at levels that exceeded standards in adult-use states like Washington or Colorado.

The cannabis was, like all government-approved cannabis, grown on a 12-acre farm at the University of Mississippi, overseen by the National Institute on Drug Abuse. And while it may be a laughable product, it’s hardly a laughing matter.

“For a researcher, it’s difficult to assess the real-world impact of high-end pot if you only have access to the low-quality stuff,” write the Post’s Chris Ingraham and Tauhid Chappell. “It’s akin to investigating the effects of bourbon by giving people Bud Light.”

NIDA has said it plans to produce “some additional marijuana this year and harvest some high THC material that will likely be above 13 percent THC.”