Not long ago, the Government of Thailand delivered 4,500 bottles of cannabis oil to treat hospital patients in what marked its first official use of marijuana for medical purposes since a recent measure legalizing such use took effect this year. Thailand has a tradition of using cannabis to relieve pain and fatigue, so it’s great to see that they’ve legalized marijuana for medical use, not to mention that it’s also going to boost their agricultural income.

This year, when it comes to medical marijuana, officials in the country have been doing what they can to get the world out about medical marijuana, including the distribution of cartoon cannabis dolls and publicly using marijuana oils. The country recently announced their launch of the government’s medical cannabis education website, and did so at an event where Prime Minister Prayut Chan-o cha made the announcement. He did so alongside a person wearing a spectacled marijuana leaf costume called Dr. Gaja, where children were also in attendance carrying their own Dr. Ganja dolls. 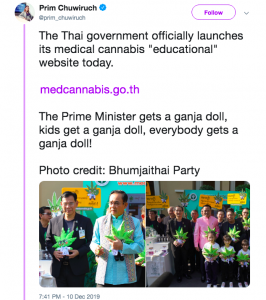 The Prime Minister spoke of the  therapeutic uses of cannabis, stating that it represents a potential treatment option for low-income people in particular, but we know that it represents a treatment options for a wide rage of diseases, at all income levels.  According to The Nation Thailand, he also demonstrated marijuana products, inhaling an oil and applying some to the back of his ears. The prime minister also said he plans to purchase some oils himself. The government’s education site features information about where to find cannabis clinics, what kinds of products are available and infographics laying out basic research into marijuana.

If you live in Canada and are interested in growing your own medical cannabis, we can help you obtain your prescription and your license to grow legally. That’s what we do! Feel free to contact us if you’re interested and would like some assistance through the process.